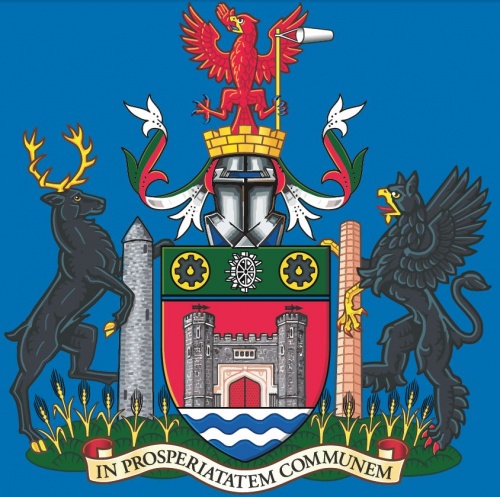 The arms include the Barbican Gate of Antrim Castle that featured in the former Arms of Antrim, with blue and white waves in the base alluding to Lough Neagh and Six-Mile-Water. The water-wheel represents the textile industry and the bezants imply wealth and prosperity; the cogwheels represent further industrial connections and are taken from the former Newtownabbey design.

The red eagle in the crest is taken from the Arms of the Pakenham and de Courcy families; it is rising from a mural crown as the phoenix did in the former crest of Newtownabbey. In its beak is the red hand from the Arms of the O’Neills, and with one foot it is holding a windsock, alluding to the strong aviation history in the local area and to the airport.

Supporting the shield is a stag from the old Arms of Antrim and the black griffin of Grimshaw from the Arms of Newtownabbey. They are standing in a field of barley, representing the rural areas, and clutching respectively a representation of the Antrim Round Tower and the Mossley Mill Chimney.

The motto "In prosperitatem communem" means "Achieving prosperity together"

© since 1995, Heraldry of the World, Ralf Hartemink Information provided by the council.