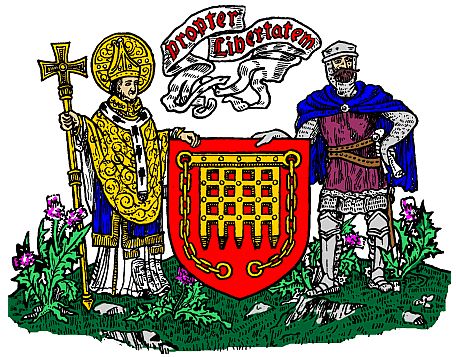 Gules, a portcullis with chains pendant Or.

And in an Escrol over the same this Motto "Propter Libertatem", and the following Supporters to be placed in a Compartment below the Shield, viz. dexter, Saint Thomas a Becket in his archiepis­ copal robes all Proper; sinister, a baron of Scotland, armed cap-a-pie, holding in his exterior hand the letter from the Conven­ tion of the Scottish Estates, held at Arbroath in the year I 320, addressed to Pope John XXII, all Proper.

Arbroath became a Burgh dependent on the Abbey of Arbroath between 1178 and 1182 and was accorded the status of a Royal Burgh by King James VI in 1599.

The arms are based on the old Burgh seal. The portcullis is said to represent the portcullis of the pend or great gateway close to the west end of Arbroath Abbey which was founded in 1178 by King William the Lion in memory of his martyred friend, Archbishop Thomas a Becket of Canterbury.

Because of this connection between the town and the King, the Royal red and gold colours have been used.

The supporters are St. Thomas a Becket, a representation of whose martyrdom was apparently used as the sacred bearings of the Burgh, since there is on record a thirteenth-century impression of a seal bearing such a device, and a Scottish Baron holding a copy of the Arbroath Declaration of Scottish Independence.

The Latin motto "For Freedom"­ comes from the famous passage in the Declaration which states: "It is not for glory, riches or honour that we fight, but for freedom alone, which no worthy man will lay down save with his life." 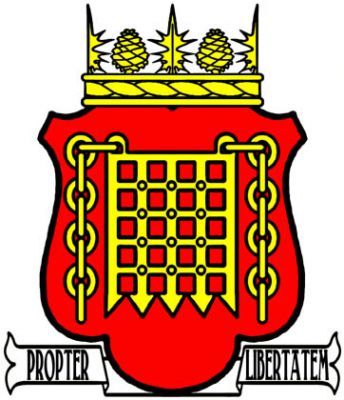 Gules, a portcullis with chains Or.

Above the Shield is placed a Coronet appropriate to a statutory Community Council, videlicet:- a circlet richly chased from which are issuant four thistle leaves (one and two halves visible) and four pine cones (two visible) Or, and in an Escrol below the same this Motto "Propter Libertatem".

These are the Burgh arms with a crown of a community council and without the supporters.