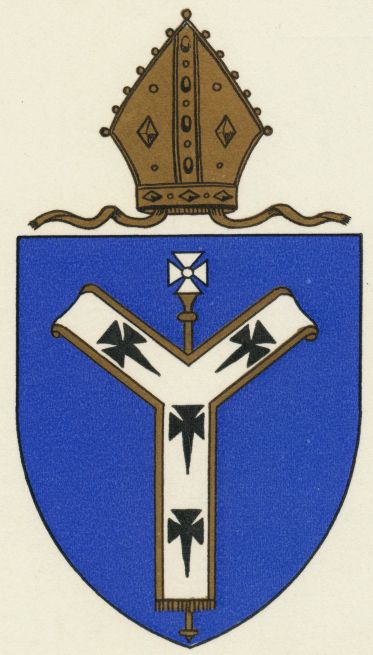 Azure, an archiepiscopal staff in pale Or surmounted of a pall argent fringed of the second and charged with four crosses patee fitchee sable.

The arms are first found on the seal of Simon Islip (1349-66) and have continued, with occasional variations, in use to the present day. His successor, Simon of Sudbury (1375-81) placed a pastoral staff on either side of the pallium, with the crook turned towards the edge of the shield. Thomas FitzAlan (alias Arundel) reverted to the original coat and impaled his personal arms with them on his seal. Other variations are to be found during the course of time, mainly in the number of crosses to be found on the pallium. On the Christchurch Gateway at Canterbury the usual number is four, though five are found on the vaulting of the arch for St. Thomas Becket and six on the right-hand door for William Juxon. Again the staff and cross have varied in colour, the staff being sometimes silver. Sometimes the edging of the pallium is omitted. On Cranmer's faculty seal (1539) the pallium is represented as wavy and on other seals of the same prelate the staff has an orb for a head; on the seal of 1533 the cross is apparently replaced by a crown.

Originally these arms seem to have merely indicated the archiepiscopal dignity. They were appropriate to a medieval Diocese as the pallium is the distinguishing vestment of an archbishop in communion with the Diocese of Rome.

Arms listed before 1230 are most likely later attributions.