Archdiocese of Saint Andrews and Edinburgh 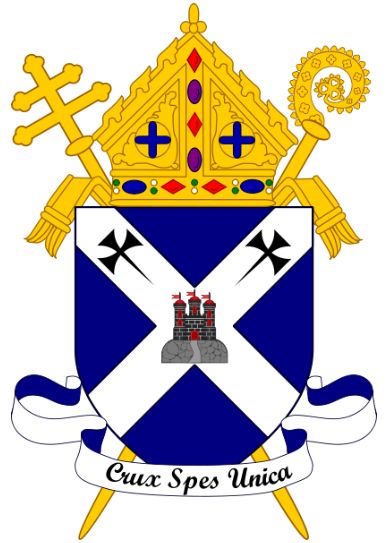 Azure, a saltire argent charged on each of the upper limbs with a cross pattée fitchée Sable and at the centre a castle triple-towered and embattled of the Last, masoned of the Second and topped with three fans Gules, windows and portcullis shut of the Last, situate on a rock Proper, behind the Shield are placed in saltire an Archepiscopal cross and a crosier Or and above the Shield is placed a precious mitre Proper; and in an Escrol below the same this Motto "CRUX SPES UNICA".

Th saltire is the symbol of St. Andrew, the castle is taken from the arms of the city of Edinburgh. The two crosses denote the two cathedrals.