Ards and North Down

ARDS AND NORTH DOWN 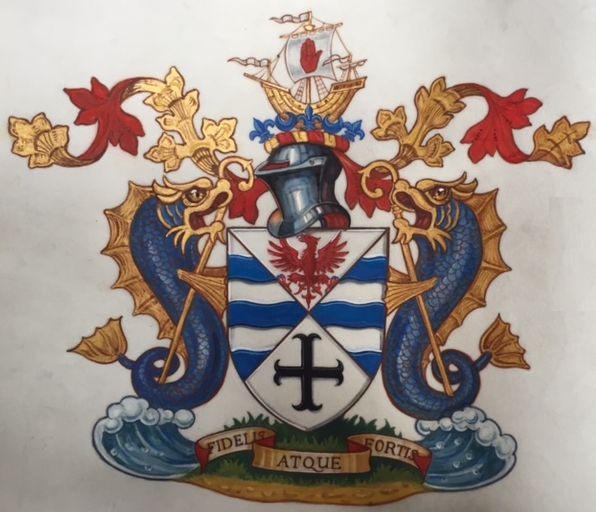 Arms : Per saltire Argent and barry wavy Argent and Azure in chief an Eagle displayed Gules and in base a Cross Moline Sable.
Crest : On a Wreath Or and Gules in front of a Lymphad Or with a Sail Argent charged with a dexter Hand couped Gules three Fleurs-de-Lys and two Crescents Azure.
Supporters : On either side a Dolphin Azure finned Or each supporting a Pastoral Staff of the last.
Motto: Fidelis atque fortis

The arms were granted on ?

The arms are composed of elements from the arms of the two former Boroughs. Like the Borough of Ards the shield is divided diagonally in the shape of St. Andrew's cross and what is popularly known as St. Patrick's cross. This partition alludes to the Scottish origin of the Montgomerys also to the Charter of 1613 granted to the Town of Newtownards by King James I. The eagle is that of the de Courcys who invaded Ulster in the twelfth century. John de Courcy built the castle round which Newtownards developed. The black cross moline is from the heraldry of the Colvilles. The white and blue waves are from the arms of the Borough of North Down and ultimately the previous Borough of Bangor. They show that Bangor is a seaside town, but are appropriate to the whole of the new Borough's coastline.

The ship, like those in the North Down arms, feature the Red Hand of Ulster on their sails, to denote that the area is a coastal district in the Province of Ulster. The fleurs-de-lys, like those in the Ards arms, are from the shield of the Montgomerys, Earls of Mount-Alexander; Sir Hugh Montgomery came into the Newtownards Priory property in 1608. The crescents are also from the heraldry of the Montgomerys.

The supporting dolphins, further signify the Borough's links with the sea. Like the North Down supporters they support crosiers in allusion to the two monastic foundations associated with Newtownards - Movilla Abbey, said to have been founded by St. Finian in 540, and the Priory founded by Walter de Burgh in the thirteenth century. The crosiers also link to Bangor's crest with its figure of a haloed St Comgall, founder of the town's abbey, who was an important figure in the spread of Christianity.

The motto, used by Ards, is adapted from that of the Savages of Portaferry, one of the most ancient of Ulster families.

© since 1995, Heraldry of the World, Ralf Hartemink Image and info from the Ards and North Down council website