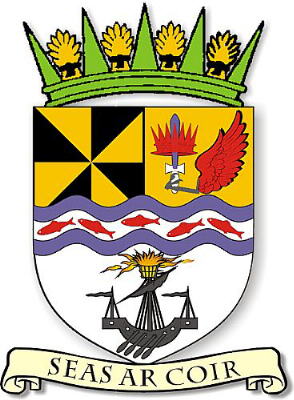 Parted per fess and in chief per pale: 1st, gyronny of eight Or and Sable; 2nd, Or, a wing displayed Gules, claw membered Sable, grasping a sword in pale Azure, hilted and pommelled Argent and environed of an antique crown also Gules; in base Argent, a lymphad, oars in action, sails furled Sable, with a beacon enflamed Gules at the masthead; over all a fess wavy Azure charged with a bar wavy Argent, upon the last five fish naiant Gules.

Below the Shield, which is ensigned of a coronet appropriate to a County Council, is set on an Escrol this Motto "Seas Ar Coir".

The arms have in the top left corner the gold and black gyrons of the Campbells, Dukes of Argyll. In the top right is eagle's wing and claw for Macdonald, holding a crown and sword for the Lordship of the Isles. In base is a lymphad with a beacon at the top of the mast for the Lordship of Lorn.

Across the centre of the shield is a blue and silver wave, charged with five fish. This stands for the sea lochs and fishing industry of the County.

The motto is SEAS AR COIR or Maintain Our Right.

The crown above the shield is the coronet granted to Scottish County Councils from 1951 on.