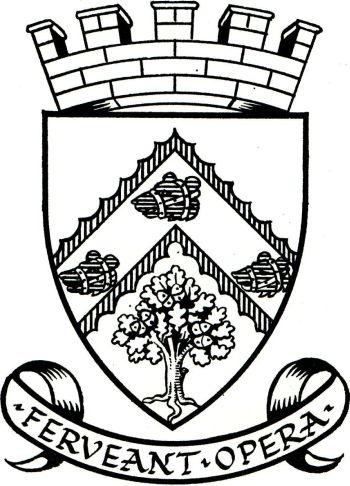 Argent, on a chevron engrailed Gules, voided of the field, three bears' heads couped Azure, muzzled Or, in base an oak tree eradicated Proper, fructed Or.

Above the Shield is placed a mural crown and in an Escrol below the Shield this Motto "Ferveant Opera".

The silver and red colours and the engrailed voided chevron of Honeyman recall the founder of the Burgh, and the Mackay bears' heads his mother, and thus the connection with Armadale in Sutherland. The oak tree was included in reference to Mr. James Wood of Wallhouse, a generous benefactor of the town, who took some part in obtaining the Grant of arms and met the cost of the fees involved.

The Latin motto "May the works glow" was stated at the time to have both a classical and a modern signification; no doubt the latter would refer to the chemical and paraffin works in the vicinity.