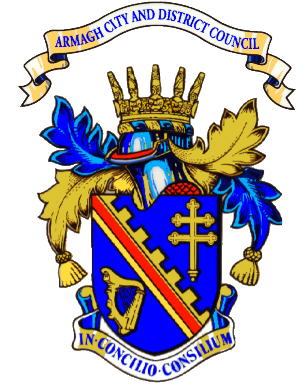 Arms : Azure, on a bend, embattled between in chief a Primatial Cross and in base, a harp or, a bendlet gules.
Crest : On a wreath of the colours, an ancient Irish Crown gold.
Motto :" In Concilio Consilium ".

The arms were officially granted on December 10, 1958.

The Primatial Cross represents the city's foundation by St. Patrick in the year A.D. 444 and its position as the ecclesiastical capital of Ireland. It also commemorates the fact that from early times Armagh was the greatest of Ireland's schools of learning, and emphasises the importance of the Book of Arinagh, the earliest datable manuscript of the Christian period, compiled in A.D. 807. The Embattled Bend stresses the civic character of the arms and particularly refers to the request in 1226 by King Henry Ill to the then Archbishop Netterville for a site in the city to build a castle, a building now demolished but still giving name to one of Armagh's oldest streets.

The Harp perpetuates the Seal of the Charter granted by King james 1 in 1613 and in use from that date to the present, thus reminding all and sundry that the city was a market town of some standing from the year 1467 when King Edward IV granted a fresh patent to Archbishop Bole. This was a confirmation of an earlier one, the date of which is now unknown.

The Irish Crown as a crest signifies that the ancient territory of Emain Macha was the seat of the Kings of Ulster from 350 B.C. to A.D. 332, and the location of Ireland's most famous order of chivalry, the Red Branch Knights. The Crown also recognises Armagh as a place of regal interments down the centuries, especially of Brian Born in 1014, and in 1022 of his successor, Mael Sechlainn, (Malachy of the Golden Collar).

© since 1995, Heraldry of the World, Ralf Hartemink Information provided by the Armagh Council.