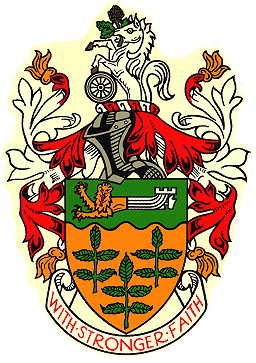 Arms: Or three ash leaves couped two and one each of five leaflets proper on a chief wavy vert a lion passant guardant Or dimidiating the hull of an ancient ship argent.
Crest: On a wreath argent and gules a demi horse argent holding in the mouth a hop cone slipped and leaved and resting the sinister forehoof on a locomotive driving wheel proper.
Motto: With Stronger faith.

The golden colour of the lower part of the arms represents the richness and fertility of the area, also known as the Garden of England. The three twigs represent the three councils that formed greater Ashford. Each has five leaves, one for each of the five former councils.
The wavy division symbolises the Stour, Rother and Beult rivers in the district.

The chief shows the lion-boat of the arms of the historical Cinque Ports, of which Tenterden was a member.

Not on the picture above, but belonging to the arms, is a white horse as a crest. The horse is taken from the arms of Kent, to which the district belongs. The crest is placed on a helmet with white and red mantling, the colours of Kent. The horse holds in its mouth a hop-cone (for the hop growing in the area) and a driving wheel (for the industry). Below the arms is a motto :"With stronger faith", taken from a poem by the 17th century poet Richard Lovelace of Betherdsen in the district.