From Heraldry of the World
Your site history : Association des descendants de Babin
Jump to navigation Jump to search 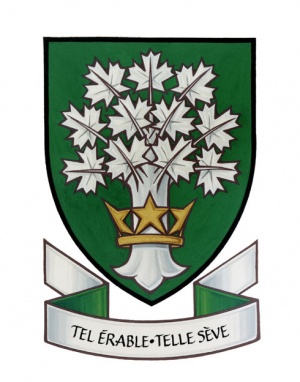 The arms were officially granted on December 15, 2003.

The maple tree symbolizes Canada and its leaves the eleven children of the pioneer couple Antoine Babin and Marie Mercier, who married in Port-Royal circa 1662. Antoine Babin arrived in Acadia from France circa 1654. Four boys and seven daughters were born of this union. Antoine Babin was designated as a farm labourer, hence the choice of green as the main colour of the shield. The star is the chief symbol of Acadia and, forming a crown, evokes Acadia's Port-Royal.

The motto, "As the maple, so the sap", refers to the shield's main charge. It indicates that the way in which we raise today's young will determine the quality of tomorrow's adults.