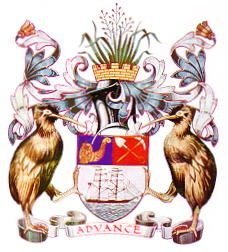 Official blazon :
Arms: Argent, upon Waves of the Sea a two-masted Ship in full Sail proper flagged Gules, on a chief per pale Azure and Gules to the dexter a Cornucopia Or, to the sinister a Shovel surmounted by a Pick, in saltire proper. Crest: Issuant out of a Mural Crown Or a representation of the Phormium tenax flowered proper. Supporters: On either side An Apertyx (or Kiwi) proper.

The arms refer in the main to the City's history and special features. The first quarter of the shield contains a Cornucopia (the horn of plenty) recognising the wealth of the land and the agricultural productivity of the district; in the second quarter, a pick and a shovel as a reminder of early mining activities in the region; and at the base of the shield, a sailing ship symbolising the relationship of Auckland and the sea, and the importance of Auckland as a principal port.


Above the shield is a steel helmet with closed visor used for corporations such as the Auckland City Council. Flowing from the Helmet is the decorative mantling, on top of the Helmet is the Crest which is an Heraldic device showing a crown in the form of a wall with Battlements symbolising a local authority. Arising out of this crown is a native flax in flower, of the variety found in the Auckland area; the kiwis standing on the scroll on either side of the Shield as if upholding and guarding the Shield, represent New Zealand being indigenous to this country only.