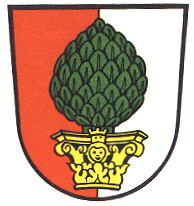 The oldest known seal of Augsburg dates from 1237 and shows a city gate under a star. In the gate there is a so-called tree-of-life. From 1260 until the 19th century the seals of the city showed the same composition, but with a bunch of grapes in the gate. The grapes are a canting symbol, Augster is a variety of grapes.

In the meantime the arms developed separately. In the 15th century the grapes appear in images on a red and white shield. The shield is taken from the arms of the Bishops of Augsburg. In the late 15th century an antique pine tree cone was found in the city and the grapes were subsequently changed into a so-called Zirbelnuss (Swiss pine, also called Swiss stone pine). At the same time the pillar was added. In 1521 the small angel's head appears for the first time.

The crown does not appear until 1811. The arms have not changed since.