From Heraldry of the World
Your site history : Aurich (kreis)
Jump to navigation Jump to search 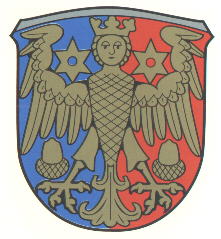 The arms show the harpy of Ost-Friesland, as the district belongs to the territory of Ost-Friesland. The harpy is also part of the arms of the city of Emden. The two old districts are represented by the acorns (Aurich) and spurs (Norden).

The old arms were granted in 1950.
The arms show an oak tree, especially the Upstalsboom. This was a special tree under which the free Frisians had their annual meetings (like a parliament). At these meetings justice was done, laws were approved and people came together. The tree was situated just outside Aurich. The town became the centre of the Frisian territory, part of which is the present landkreis. In 1744 the counts of Ostfriesland took possession of the area, which later became part of Prussia. 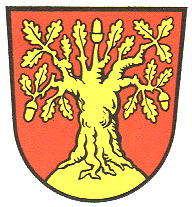