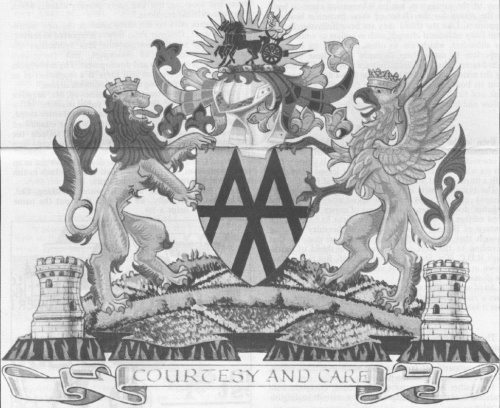 Arms : Or, two chevronels interlaced, overall a bar sable.
Crest: on a wreath of the colours a representation of Apollo proper driving his chariot and horses sable in front of a demi sun Or.
Supporters: dexter, a lion Or, crined and tufted sable, and crowned with a mural crown Or, masoned sable. Sinister: a griffin Or armed and beaked and tufted sable, crowned with a rural crown Or. The whole set upon a compartment comprising a grassy mount vert, at either side a tower proper, both joined by a road Or.
Motto: Courtesy and Care

The shield shows the initials of the organisation in an heraldic way.

Town and country are symbolised by the crowns worn by the supporters.