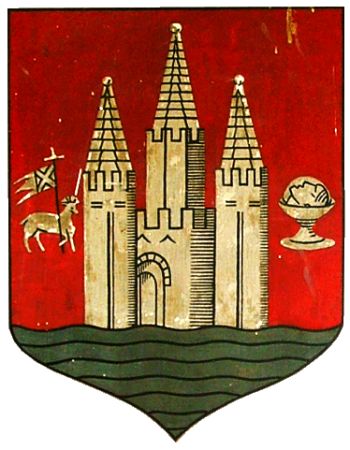 Gules, a castle triple-towered Argent betwixt a Holy Lamb, cross staff and banner of Saint Andrew, on the dexter, and on the sinister the head of John the Baptist in a charger Proper, in the base the sea Azure

The arms were officially granted on September 5, 1673.

Ayr became a Royal Burgh between 1203 and 1206 in the reign of King William the Lion. It possesses the oldest surviving Charter of any Royal Burgh.

The arms are based on the earliest known seal of the Burgh, of which a thirteenth­ century impression is on record. They use the red and silver colours of St. John the Baptist and show the Castle of Ayr, built between the Doon and Ayr rivers by King William the Lion in 1197, standing by the sea.

St. John the Baptist, the patron saint of the Burgh, is shown by the Holy Lamb, who carries a St. Andrew's flag and by the plate containing his head, the latter referring to his beheading by Herod at the request of Herodias and Salome (Matthew 14). The sea in base denotes that Ayr is a seaport.