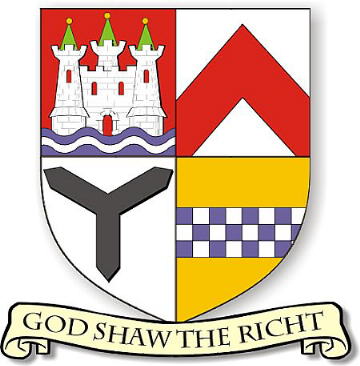 Quarterly: 1st, Gules, issuant from the sea in base undy Azure and Argent, a castle triple-towered of the Last, masoned Sable, windows and port of the First, the towers capped by pointed turrets Vert, each having a ball Or; 2nd, Argent, a chevron Gules; 3rd, Argent, a shakefork Sable; 4th, Or, a fess chequy Azure and Argent.

In an Escrol under the Shield is this Motto "God Schaw the Richt".

The arms have four quarters. The first has a castle from the arms of Ayr, the second has a red chevron on silver for the Carrick district, the third has a black shakefork on white for the Cunninghame district and a blue and silver fess on gold (The Stewart arms) for Kyle.

The motto is from the tomb of Captain Thomas Crawford. 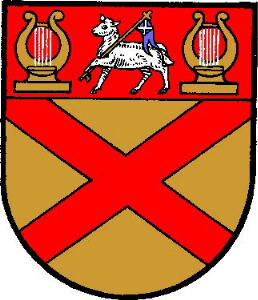 These showed a red cross and in a chief on gold, the arms of Bruce, Lord of Annandale. To these were added a paschal lamb from the arms of Ayr, and two lyres for the musical and artistic heritage of the County.