From Heraldry of the World
Your site history : Bad Aussee
Jump to navigation Jump to search 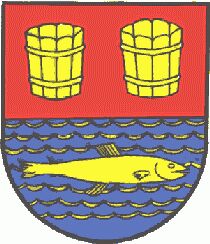 Bad Aussee was granted the use of a seal by Emperor Maximilian I in 1505. In 1994, the city was formally re-granted the motif of the seal as a coat of arms.

Bad Aussee has always had a special position. Since the Middle Ages, the city was the site of one of the great Austrian saltworks. The mining of salt was a state monopoly and the profits have always been important. The two wooden buckets (Salzkufen) were used to transport brine and fresh salt. The fish is a brook trout (Saibling), a species characteristic to the Grundlsee near the city. In times past, the Dukes of Styria used to levy annual payments in kind to be delivered in these fish which make very good eating.