From Heraldry of the World
Your site history : Bad Cannstatt
Jump to navigation Jump to search 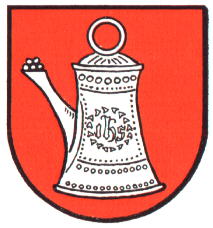 Bad Cannstatt is first mentioned as Canstat ad Necarum in 708. It received city rights in the early 14th century. All seals of Bad Cannstatt (known since 1353) show a canting jug (Kanne). The jug also appears in the arms of the Lords of Cannstatt since 1267. Whether the family took the arms of the town or vice-versa is not known. The present family Schilling von Canstatt still uses a golden jug in a red field as arms.

The size and shape of the jug varies widely on seals and images. The jug also is sometimes shown facing left, but mainly facing right as in the above arms. The colours of the arms are known since 1560, but the arms sometimes appear with a golden jug or a dark (black ?) field.