From Heraldry of the World
Your site history : Bad Gams
Jump to navigation Jump to search 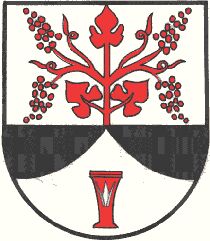 The municipality has changed its name some time ago from Gams ob Frauental to Bad Gams. Local waters have been used for curative purposes for a long time. Thus, the cup was put in the arms. The name of the municipality, Gams, does not, in fact, derive from the dialect "Gams" (Gemse, chamois), but means "stone". That stone, a sort of gneiss, was quite important, economically. It is represented by the black bar, pierced by the white point, representing the springs. The vine indicates a long, long tradition of viniculture; the traditional vine in this region is the Wildbacher Rebe, which yields the Schilcher, a very typical Styrian drink.