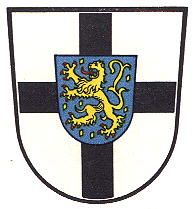 The arms show the cross of the Teutonic Order and an escutcheon with the lion of Nassau. The oldest known seal of the town dates from 1617 and shows the arms of Nassau with St. Mary as a supporter. All seals until 1901 show the same composition. The town belonged to Nassau from the 13th century until the19th century. The present arms were granted in 1939 and add the cross. The Teutonic Order owned the local church and several other rights until 1231.