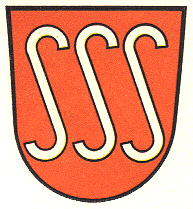 The arms were granted in 1939 and show three hooks, used in former times to hang the cooking pots over the fire. (Bad) Salzdetfurth was founded around the salt mines in the 12th century.

The oldest known seal dates from around 1392 and already shows the three hooks above a salt pan. The hooks can also be seen on a 16th century stone in the local church and a smaller seal from the same century. The salt pan only appeared on the first seal.

In the 17th century a small figure was used on the seals, it was designated as a 'Soltmänneken' or salt-man, which was a figure in reference to the name of the town.