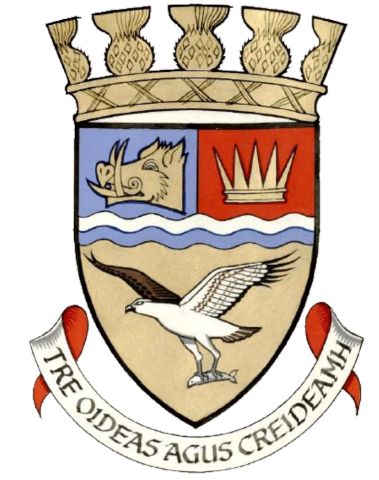 Or, an osprey volant grasping a fish in its talons Proper, a chief wavy per pale, dexter, Azure a boar's head couped Or and sinister, Gules an antique crown also Or, a bar wavy enhanced per fess wavy Argent and Azure.

Above the Shield is placed a coronet appropriate to a statutory District, videlicet:- a circlet richly chased, from which are issuant eight thistle-heads (three and two halves visible) Or; and in an Escrol below the same this Motto "Tre Oideas Agus Creideamh ".

The arms show in the first quarter a boar's head, taken from the arms of Clan Gordon. It represents Badenoch and Kingussie, as both areas were ruled by branches of this clan.
The antique crown is taken from the arms of the Grant family, an important family in Strathspey and Granton-on-Spey since the 15th century.
The wavy bar represents the Spey river.
The lower half shows an osprey, symbolising the osprey colony which developed at Loch Garten during the second half of the 20th century.