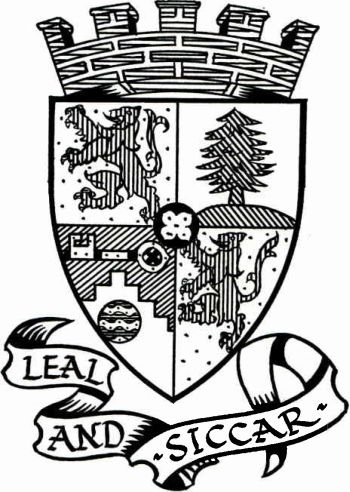 Quarterly: 1st and 4th, Or, a lion rampant Gules, armed and langued Azure; 2nd, Argent, a fir tree issuant from a mount in base Vert; srd, per chevron indented Purpure and Argent, a key fessways, wards upwards Or, garnished Sable, and in base a fountain Azure and Or; surmount­ing the quarterings a roundel Sable charged of a quatrefoil Or.

And in an Escrol under the Shield, which is ensigned of a Burghal coronet Azure masoned Argent, is placed this Motto "Leal and Siccar".

Ballater was founded in the later part of the eighteenth century by Francis Farquharson, 6th of Monaltrie.

The arms are based on those of Farquharson of Invercauld, of which family Monaltrie was a cadet; these arms were used on the Burgh seal from 1892 to 1929.

The Macduff lions in the 1st and 4th quarters and the fir tree in the 2nd quarter are taken straight from the Farquharson coat. The 3rd quarter refers to two important features in the town's history: the golden key on the purple field represents St. Nathalan, the famous Deeside missionary of the seventh century, to whom the nearby church of Tullich is dedicated, and whose legendary symbol is a key.

The fountain and the indented chevron are for the Wells of Pannanich which are in appearance rather like the latter.

The roundel overall with its quatrefoil recalls the Baron Ban's English wife, Margaret Eyre of Hassop in Derbyshire.

The motto, is a Scots version of the Farquharson motto "Fide et Fortitudine".