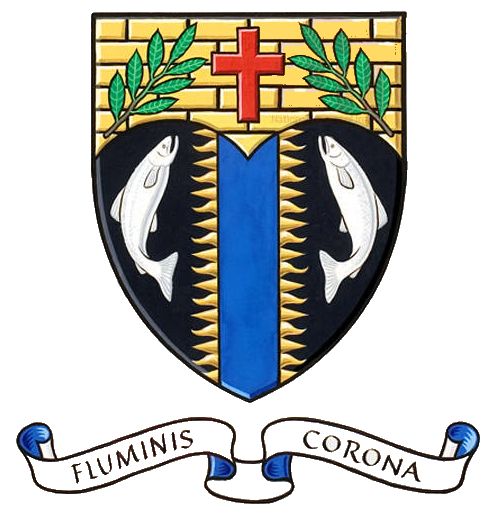 Sable a pale azure rayed or between two salmon leaping argent, on a chief double arched of the third masoned of the first a passion cross gules between two laurel branches proper, with the Motto: Fluminis Corona.

The arms were granted to Ballyshannon Town Commissioners on 17 October, 1980.

The arms of Ballyshannon contains a pale blue band down the centre of the shield to represent the River Erne, which is rayed to recall the light and power now generated by the hydro-electric development. There is a salmon on either side relating to the fishing in this area and in the upper part of the shield is placed a chief, double arched and masoned, representing the O'Donnell stronghold and also the gateway theme. On this chief is placed a cross, which recalls the town's association with poetry and literature. The motto is "Fluminis Corona", meaning "Crown of the River' which incorporates the theme of the River Eme and the location and significance of Ballyshannon as the "gateway" to County Donegal.