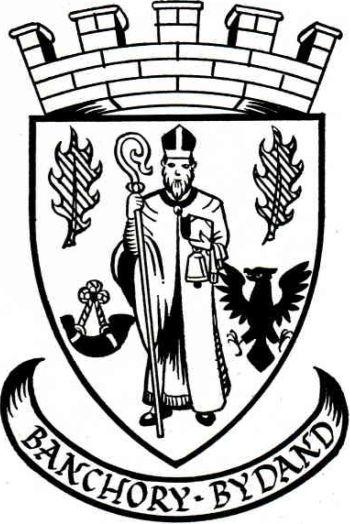 Argent, the figure of Saint Ternan, vested and mitred Proper, with his crosier in his dexter hand and a book and a bell in his sinister hand, standing between two holly leaves in chief Vert, and in base a hunting horn and an eagle displayed Sable, the former garnished Or and stringed Gules, the latter beaked and membered of the Last.

Above the Shield is placed a mural coronet of befitting degree and in an Escrol under the same this Motto "Banchory Bydand".

The arms show St. Ternan, patron saint of the parish, who is thought to have founded a Christian settlement in the district in the fifth century and to have been buried there. Vested as a Bishop, he carries his crosier, a book-he is said to have possessed a copy of St. Matthew's Gospel encased in a gold and silver shrine-and his famous bell or "ronnecht", which is still in existence.

The holly leaves and the hunting horn come from the arms of Burnett of Leys, the principal local family; the latter represents the famous fourteenth-century horn of Leys, still in the Burnetts' Castle of Crathes, and probably originally their badge of office as Royal Forester of Drum.

The eagle comes from the arms of Ramsay of Balmain, another neighbouring family which is related to the Burnetts.

The motto is based on that of the Gordon family; the Dukes of Gordon owned the estates of Durris close to Banchory in the eighteenth and nineteenth centuries.

In May 2019 the commulity council received a grant of the old Burgh arms, but now with the appropriate crow for a community council: 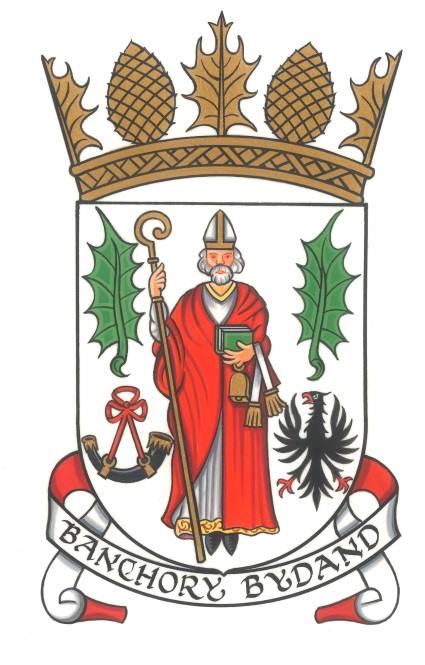