From Heraldry of the World
Your site history : Banská Štiavnica
Jump to navigation Jump to search 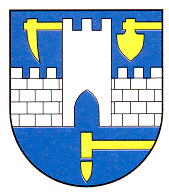 The arms are one of the oldest in the former Kingdom of Hungary and thus also among the oldest in Slovakia. It dates from the first half of the 13th century. The gate symbolises the city, the tools the importance of mining in the area.

The settlement was founded in the vicinity of rich silver ore deposits most probably in the 12th century. In the 1340s the com­munity was promoted by the Hungarian King Bela IV to the status of a royal mining town; the coat-of-arms granted on that occasion was changed several times.

In 1788 King Joseph II granted new arms after the town of Štiavnica was combined with the town of Banská Bela. It showed a fortified wall with a tower. The gate with lifted portcullis indicate the status of a free town while the lizards on both sides of the fortification refer to the legend to the effect that the ore lodes were discovered by a lizard. Above the tower was a small shield with crossed mining hammers and four balls between their handles represent the coat-of-arms of the town of Banská Bela. The mining picks placed on both sides of the shield are meant to emphasize the nature of a mining town. These arms are shown below.

The current arms are based on the oldest arms of the town.