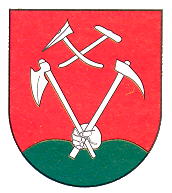 The arms are based on the arms mentioned for the city in a roll of arms from 1563. The tools in the upper part indicate that the city is historically a mining city. They are also canting, Baňa means mine. The meaning of the arms in the base is not known,l neither is it known when these were added.