From Heraldry of the World
Your site history : Barrow
Jump to navigation Jump to search 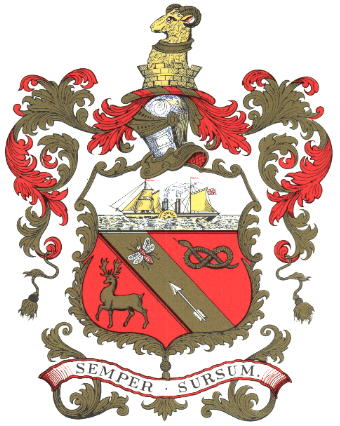 Arms : Gules on a Bend between a Serpent nowed in chief and a Stag trippant in base Or an Arrow pointing upwards to a Bee volant proper upon a Chief Argent on Waves of the Sea a Paddle-Wheel Steamship under steam and canvas also proper.
Crest : On a Wreath of the Colours out of the Battlements of a Tower a Ram's Head proper armed and collared Or.
Motto: 'SEMPER SURSUM' - Ever onward

The arms were officially granted on 13th December 1867 to Barrow-in-Furness and continued by Barrow Borough Council on 16th April 1975.

The bend in the lower field shows a canting bee and arrow, for B-arrow. The name, however, is probably derived from Barray and Barley Isle.

The serpent and the stag are taken from the crests of the Duke of Devonshire and the Duke of Buccleuch respectively, who were the principal landowners.

The ship in the chief symbolises the fact that Barrow-in-Furnes is a major shipping port.The crest shows the canting symbol for Sir James Ramsden from Furness Abbey. He played a major role in the development of the city in the 19th century.