Incorporated into : 1974 Vale of Glamorgan 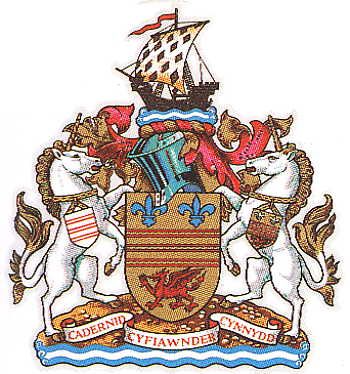 Arms : Or three Bars gemel Gules between in chief two Fleurs-de-Lys Azure and in base a Dragon passant of the second.
Crest : On a Wreath of the Colours upon Water barry wavy proper a Lymphad Sable sail set Argent lozengy also Sable pennons flying Gules.
Supporters : either side a Unicorn Argent armed crined and unguled Or gorged with a Chain of the last pendent thereform by a like Chain an Escutcheon that on the dexter Argent three bars gemel Gules and that on the sinister as the Arms.
Motto: 'CADERNID CYFIAWNDER CYNNYDD' - Stability, justice, progress

The bars gemel or pairs of barrulets are from the arms of the De Barri family and the fleurs-de-lis are from the heraldry of Lord Davies of Llandinam. The red dragon is that of Wales.

The ship with the black diamonds on its sail alludes to the coal exported from Barry.

The supporters are derived from those of the Earl of Plymouth.

© since 1995, Heraldry of the World, Ralf Hartemink Image and information from here.