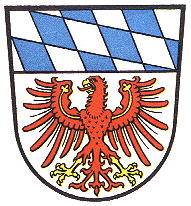 The arms show the eagle of Brandenburg as a symbol of the importance of the Margraves of Nürnberg, who ruled the largest part of the district until 1791. Margrave Friedrich of Nürnberg took the eagle in 1415 as his arms, after he acquired Brandenburg. The upper part shows the arms of Bayern and symbolises the fact that the area around Kemnath belonged to the Wittelsbach family, the Bavarian Royal family.