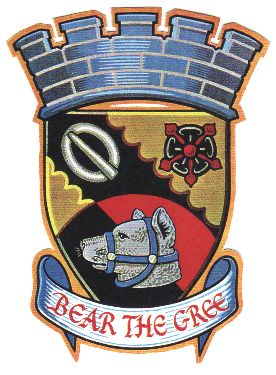 Per fess enarched Or and in base per bend Gules and Sable, a bend engrailed of the Third, in dexter chief charged with a buckle Argent and in sinister chief a rose of the Third, barbed and seeded of the Second, and in base a bear's head couped of the Fourth, muzzled Azure.

Below the Shield which is ensigned of the coronet proper to a Police Burgh, videlicet: Azure masoned Argent, is placed in an Escrol this Motto "Bear the Gree".

The upper part of the shield has a black engrailed bend and gold buckle to recall the Colquhouns of Gar­scadden and Killermont, Superiors from the fourteenth century of the land on which the Burgh stands, while the Campbells of Succoth, who owned the adjacent estate of Garscube from 1687, are remembered by the black and gold colours; these two families are now represented by the Campbell-Colquhouns of Killermont and Gars­cadden.

The black rose is the Lennox rose. In the lower part of the shield, the red colour recalls Lennox and St. Patrick (Bearsden is in New Kilpatrick parish), while the bear is supposed to be looking into his "den", thus making a direct reference to the Burgh,s name: there is also a hint of a Galbraith connection here as Sir Andrew de Galbraith, who once owned the estate of Gart­connel (now part of the Burgh), is said to have borne a shield with a single bear and the Lennox saltire in chief.

The Scots motto which includes the word "bear" comes from Robert Burns' song "A Man's a Man for a' that" and means "Have the first place".