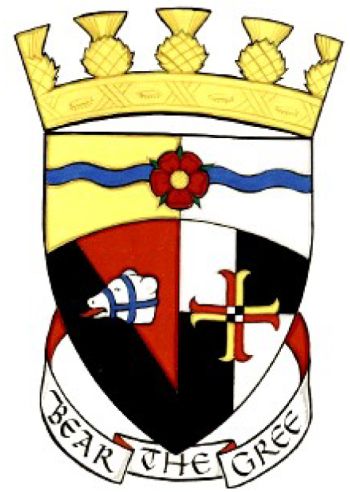 Per pale: dexter, per bend Gules and Sable a bear's head couped Argent, langued ofthe First, muzzled Azure; sinister, quarterly of the Third and Second a cross moline, square pierced of the field and divided per cross of the First and Or; on a chief enarched per pale of the Last and Third a bar wavy of the Fourth, over all at the middle chief a rose of the First, barbed and seeded Proper.

Above the Shield is placed a coronet appropriate to a statutory District, videlicet:-a circlet richly chased, from which are issuant eight thistle-heads (three and two halves visible) Or; and in an Escrol under the same this Motto" Bear The Gree".