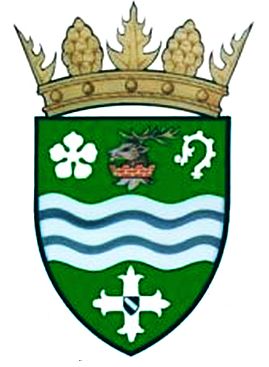 Vert, on a fess wavy Argent, two barrulets wavy Sable between in chief a stag's head erased Proper, gorged with a mural coronet Gules, masoned Argent, between a fraise and a crozier head Argent, and in base a cross flory Argent having at its centre point an inescutcheon Azure charged with a bend Argent.

Above the Shield is placed a Coronet appropriate to a statutory Community Council, videlicet:- a circlet richly chased from ' which are issuant four thistle leaves (one and two halves visible) and four pine cones (two visible) Or, and in an Escrol below the same this Motto "Beau Lieu".

The green field of the shield has been chosen to represent the agricultural and rural character of the Beauly area. The wavy fess is for the river Beauly; the two wavy barrulets recall that it is formed, near Erchless Castle, by the confluence of the rivers Farrar and Glass.

The cross flory in base is for Beauly Priory and its monks of the Valliscaulian Order; the shield in its centre bears the arms of John Biset of Lovat, who founded the Priory about 1230.

The fleurs-de-lys on the cross are a reminder that the Valliscaulians came from France and its silver tincture that they wore white habits and were known as "the White Monks".

In the chief the fraise and the stag's head come from the arms of the Lords Fraser of Lovat, a family long closely associated with the area; the crozier and a stag's head appear on a stone, above the west door of the Priory Church, which commemorates Robert Reid, Abbot of Kinloss, who became Commendator of Beauly Priory in 1531, was later Bishop of Orkney and Lord President of the Court of Session, and was one of the most famous Scotsmen of his day.

The red mural coronet shows that Beauly was a burgh of regality (erected 1704).

The French motto "Beau Lieu" has a very long association with the village; it also alludes to the fact that Beauly is set among some of the finest scenery in the Highlands.