From Heraldry of the World
Your site history : Beilngries (kreis)
Jump to navigation Jump to search 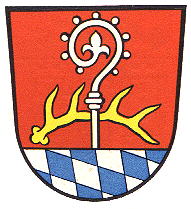 The oldest rulers in the district were the Counts of Hirschberg, which are symbolised by the antler. In 1305 the territory became a possession of the monastery in Eichstätt, which is represented by the staff. The Bavarian arms in the lower part symbolise the influence of the Bavarian Kings in the area since the 14th century and the incorporation into Bavaria in the beginning of the 19th century.