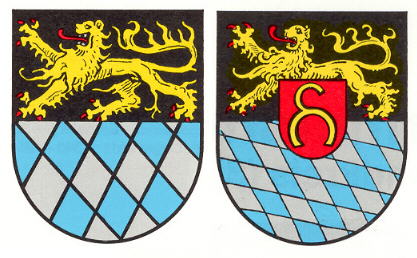 The arms are a combination of the lion of the Pfalz and the arms of Bavaria (lower part). This combination is the arms of the Pfalz during the reign of the Wittelsbach family. It appears on the seals of Bellheim already in the 15th century. The escutcheon shows the local symbol, which has been used to mark boundaries and village properties. It was used as the arms in the late 19th century. The arms of the Pfalz were granted as arms for the village in 1939 (above left), but to avoid confusion with similar arms, the village symbol was added in 1961.