From Heraldry of the World
Your site history : Berg (Ravensburg)
Jump to navigation Jump to search 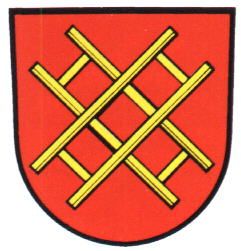 Prior to 1958 the local council used a seal with the local church. The new arms were designed in 1958 as no historical arms or seals were known. The arms show two ladders, taken from the arms of the medieval Lords of Tobel, who had their castle in the village of Tobel in the municipality.