From Heraldry of the World
Your site history : Bergisch Gladbach
Jump to navigation Jump to search 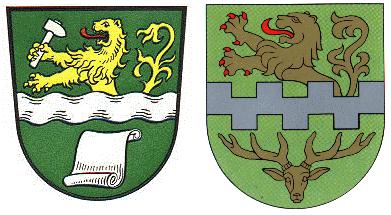 The arms were newly devised in 1905, as there were no old seals or arms known. The lion is taken from the arms of the Counts of Berg, as the city historically belonged to Berg. The colours (originally red on silver) were changed, according to the heraldic rule of tincture.

The wavy bar is the Strunde brook and is at the same time canting (Bach=brook).
The sheet of paper in the lower part of the first arms indicates the importance of the paper industry since 1582. The more recent metal industry is symbolised by the hammer held by the lion. After the merger with Bensberg, the sheet of paper was replaced by the deer's head from Bensberg. The hammer was also removed. The historical importance of Berg was emphasised by the addition of the bar, which is taken from the oldest arms of the Counts of Berg.