From Heraldry of the World
Your site history : Bernburg (kreis)
Jump to navigation Jump to search 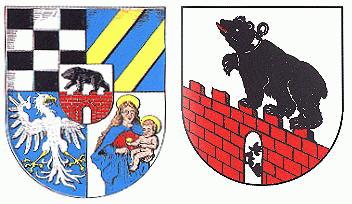 The former arms show the arms of the four territories that owned part of the present county, as well as the arms of Anhalt in an escutcheon. The first quarter shows the arms of the county Askanien, the second the ounty Warmsdorf, the third the county Mühlingen and the fourth quarter, Mary and Jezus sybolise the abbey of Nienburg.