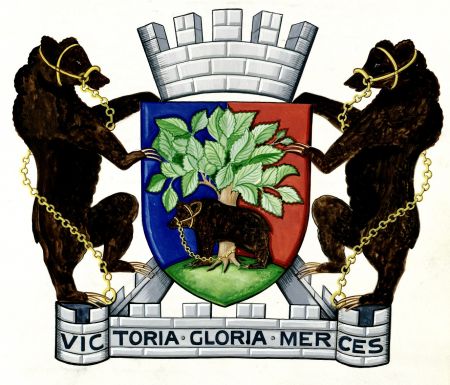 Per pale Azure and Gules, upon a mount in base Vert, a wych-elm Proper and in front of the same a bear passant Proper, muzzled and chained to the base of the tree with a chain Or.

Below the Shield, which is ensigned of the coronet proper to a Royal Burgh, upon a Compartment suitable to a Burgh Royal, along with this Motto "Victoria Gloria Merces", are set for Supporters two bears Proper, muzzled and chained with chains reflexed over their backs Or.

The arms are based on those which the town had used for many years. The bear and the wych-elm are a canting reference.

The field is parted blue (for France) and red (for England) to recall the two shields, showing the arms of England as used between 1405 and 1603 (France quartered England), which appear on either side of the bear and the tree on the present Burgh seal.

The Latin motto-"Victory, Glory, Reward"-is the traditional one associated with the town and recalls that of North Berwick.