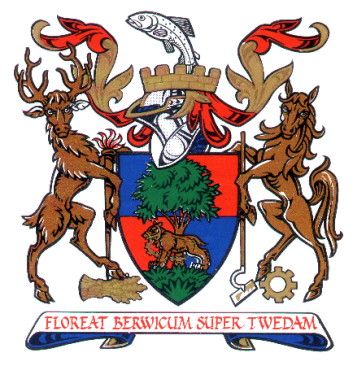 The background to the shield has been divided into four divisions thus symbolising the four authorities out of which the Berwick-upon-Tweed Borough was formed. Similarly, because of the special position of the town of Berwick-upon-Tweed as the administrative centre the "Bear and Tree" device of the former borough has been retained, perpetuating the heraldic pun on the name "Berwick". The crest consists of a mural coronet, symbolic of Municipal Government out of which emerges a fish (salmon) in allusion to the fishing industry of the area.

The dexter supporter, that is to say the stag supporting the torch is a symbol of St. Aidan who founded the Monastery at Lindisfarne. The stag rests a hoof upon a gold garb in allusion to the important agricultural activities of the area. The sinister supporter is a horse supporting a hoe also as an allusion to the agriculture of the area. The horse supports with its inner hoof a cog wheel in reference to the light industries of the area.

The English translation of the Latin motto is "May Berwick-upon-Tweed Flourish".

© since 1995, Heraldry of the World, Ralf Hartemink Image and information provided by Laurence Jones