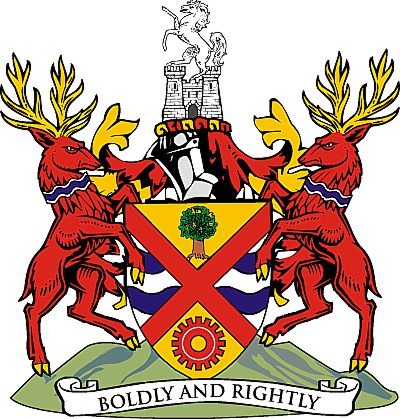 Arms: Per saltire Or and barry wavy of six Argent and Azure a Saltire Gules between in chief an Oak Tree eradicated proper fructed Or and in base a Cog Wheel Gules.
Crest: On a Wreath Or and Gules on the Battlements of a Port between two Towers Argent masoned Sable a Horse forcene Argent.
Supporters: On either side a Stag Gules attired and unguled Or gorged with a Collar wavy Argent thereon a Bar wavy Azure.
Motto: 'BOLDLY AND RIGHTLY'.

The waves in the arms represent the rivers Thames, Cray and Shuttle. The gold field at top and bottom signifies the agricultural and mineral wealth of the Borough. The oak tree was part of the arms of the old Bexley council, and depicts the pleasant rural nature of much of the council's area. The cogwheel in base is for the industrial areas of the Borough. the red saltire is said by the council to have no significance, but it does resemble the similar cross in the arms of the See of Rochester, in which Bexley lies.

The crest features the white horse of Kent standing upon an embattled gateway. This symbolises the Borough's claim to be the gateway to Kent and the South.

The red stags that support the arms come from the bearings of Lord Eardley of Belvedere House. Such a stag was part of the crest of Erith. For necessary difference they are gorged with silver and blue waves from the shield.

The motto is a translation of Crayford's FORTITER ET RECTE.Previously Bexley used the arms below: 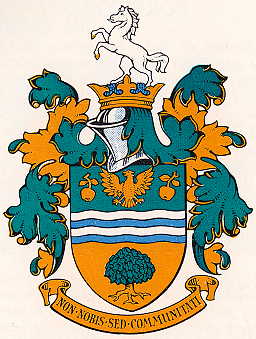 Arms: Per fesse Vert and Or a Fesse wavy barry wavy of four Argent and Azure in chief an Eagle displayed between two Apples leaved and slipped of the second and in base an Oak Tree eradicated proper.
Crest: Upon [a Mound of] Heather proper within a Coronet of four Fleur-de-Lis set upon a Rim Or a Horse forcene Argent.
Motto: 'NON NOBIS SED COMMUNITAT' - Not for ourselves but for the community.

The basic colours of green and gold recall the Bexley of old, a township in a rural setting of green fields and waving corn. The eagle is from the arms of the first and only Lord Bexley, Nicholas Vansittart, who became Chancellor of the Exchequer in 1812. The apples recall the once famous fruit growing areas of East Wickham, Welling and Bexleyheath. The blue and white waves represent the area's rivers and streams and the oak tree the woodland, once extensive, that is still preserved in the open spaces of the Borough.

The coronet commemorates the fact that Bexley received its Charter of Incorporation in the year before the coronation of George VI. It may also be taken as one of the crowns in the arms of Oxford University, which was bequeathed land in Bexley by Sir William Camden to found the Camden Professorship. The heather recalls the days when Bexleyheath was truly a heath and the horse is from the arms of the County of Council.

© since 1995, Heraldry of the World, Ralf Hartemink Image and information provided by Laurence Jones; old image from http://www.civicheraldry.co.uk, background also from Scott-Giles, 1953