From Heraldry of the World
Your site history : Biberach an der Riss
Jump to navigation Jump to search 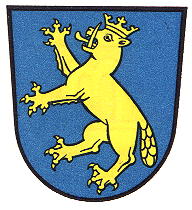 The arms were officially granted in 1962.

Biberach was already a city in 1240 and the oldest seal is known since 1258. The seal shows the canting beaver (Biber) between a tree and the Imperial Eagle. In later seals the two animals were each placed on a small shield. At the same time the beaver was placed in a small shield on the breast of the eagle. The present arms were granted in 1488 by Emperor Friedrich III, but the colours were in silver a blue beaver, crowned red. Later the colours changed to blue and gold.