THE BIRMINGHAM AND MIDLAND INSTITUTE 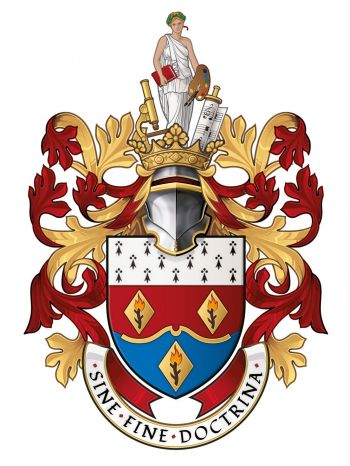 Arms : "Per fess wavy of two troughs and a wave Gules and Azure a Barrulet wavy couped to the dexter Per bend sinister and to the sinister per bend composed of two troughs and a wave fracted and there conjoined to the horns of a Crescent Or between three Lozenges also Or each charged with a Staff Raguly proper enflamed Tenny a Chief Ermine.
Crest: upon a helm Within a Coronet Or a Muse statant proper vested Argent about the temples a Wreath of Laurel Vert tied with a Riband Gules holding in the dexter hand a Book proper bound Gules and in the sinister hand a Painter's palette and two Brushes at the feet on the dexter a brass Microscope and on the sinister a music Scroll all proper Mantled Gules doubled Or.

The arms have the black and white of the early de Berminghams and the Ermine of the Calthorpe family, the gold, red and blue (plus lozenges) of other branches of the de Berminghams (see also the current arms of Birmingham). The torch of learning signified by the flaming "ragged staff" of the Earls of Warwick, since Warwickshire is the principal county of Birmingham's location.

In the middle of the shield is the depiction of the Priestley Library in the form of a partition line to represent an open golden book viewed end on.

The Crest is in the form of a Muse and in this case she carries a book as well as a palette and at her feet within a Crest Coronet lie a microscope and a music scroll thus depicting Science, Music and the Arts as per the Charter.