From Heraldry of the World
Your site history : Birten
Jump to navigation Jump to search 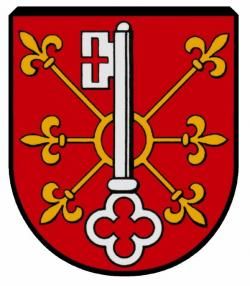 The arms were officially granted on December 11, 1962.

The arms are based on the 15th century seal of the village. The seal showed a divided shield with in the upper half the local patron saint, St. Peter, and in the lower half a half escarbuncle of the Duchy of Kleve. In the above arms the saint was replaced by his symbol, the key, which was placed on the escarbuncle.