From Heraldry of the World
Your site history : Blackburn
Jump to navigation Jump to search

Incorporated into: 1974 Blackburn with Darwen 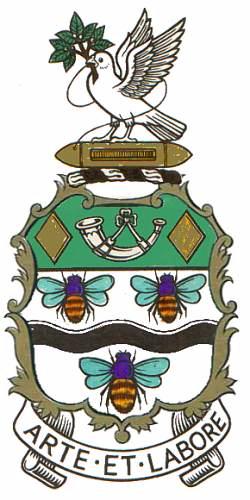 Arms : Argent a Fesse wavy Sable between three Bees volant proper on a Chief Vert a Bugle stringed Argent between two Fusils Or.
Crest : On a Wreath of the Colours a Shuttle Or thereon a Dove wings elevated Argent and holding in the beak the Thread of the Shuttle reflexed over the back and an Olive Branch proper.
Motto: 'ARTE ET LABORE' - By skill and labour

The arms were officially granted on February 14, 1852.

The black wave across the middle of the shield is the Black Burn that names the town. The white field of the arms represents the calico industry. The bees are symbols of industry and also suggest the initial B of blackburn's name. The green chief charged with a bugle horn refers to the ancient royal forest. The fusils are from the arms of Joseph Feilden, then lord of the manor, and also suggest spinning.

The crest has a dove and olive branch, a popular charge in Victorian civic arms. He stands on a weaver's shuttle. The crest represents the beneficial results emanating from the art of weaving.

The motto means By Skill and Labour. This motto is very appropriate because Blackburn, once a small town, has risen to importance through the energy and enterprise of her spinners and manufacturers, combined with the skill and labour of her operatives.