From Heraldry of the World
Your site history : Blankenheim (Ahr)
Jump to navigation Jump to search 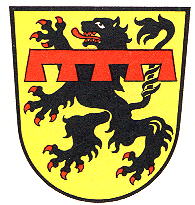 In 1935 they were officially granted to the Amt Blankenheim and again in 1971 after the merger with the other municipalities, none of which used arms.

The arms show the arms of the counts of Blankenheim. The village grew around the castle of the Blankenheim family and received city rights in the 14th century. The arms already appear on the first seal, dating from around 1380. The arms are held by St. Margartha and St. George. The arms have never changed since.

The lion of Blankenheim can also be seen in the arms of Gerolstein and Mechernich as well as several other towns and villages.