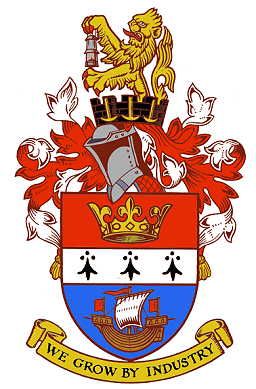 Arms : Per fesse Gules and Azure on a Fesse Argent between in chief an Ancient Crown Or and in base a Lymphad proper flags flying to the dexter Gules three Ermine Spots Sable.
Crest : Issuant out of a Mural Crown Sable charged with three Miner's Picks shafts upwards Or a demi Lion Gold holding in the dexter paw a Miner's Lamp proper.
Motto : 'WE GROW BY INDUSTRY'.

The arms combine the gold crown on red of Tynemouth Priory with the ermine fess of the Delaval family. At the base of the shield is a lymphad to show that Blyth is a port.

The crest has a black mural crown charged with gold picks to show the borough was based on coal mining. The gold lion is taken from the Northumberland County Council arms and holds a miner's lamp.

The arms are currently used by the Blyth town council.