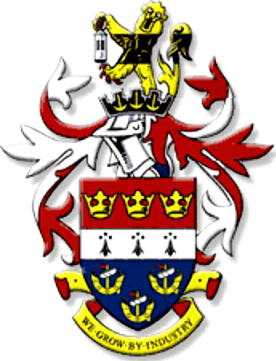 The council uses arms based on those of the Borough of Blyth. Each emblem on the shield is displayed in triplicate to commemorate the three former authorities which merged into Blyth Valley.
The three crowns at the top of the shield are from the arms of Tynemouth Priory. The ermine bar is derived from the Delaval family arms.
The ships in base represent the Port of Blyth. The crest is a lion holding a miner's lamp.
The gold lion comes from the Northumberland County Council arms. The black stripe suggests a seam of coal.

The motto - WE GROW BY INDUSTRY - was used by Blyth.