From Heraldry of the World
Your site history : Bocholt (Germany)
Jump to navigation Jump to search 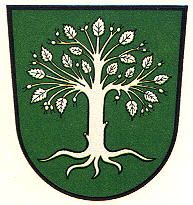 Bocholt got city rights in 1222 from the Bishop of Münster. The oldest known seal dates from the same time and shows, just as all later seals, a beech as canting symbol (beech = Buche). The arms have thus basically not changed ever since, although the size and shape of the tree have changed considerably in style during the centuries. The only exception is a 17th century seal that shows the tree with a bar. This bar is taken from the arms of <a href=m/munster2|Münster]], as Bocholt at the time was part of the State of Münster. The colours have been used for centuries, their original meaning is not known.