From Heraldry of the World
Your site history : Bochum
Jump to navigation Jump to search 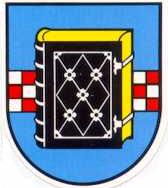 The arms of the city of Bochum historically show a canting book (Buch=book), although the name may not be derived from the word Buch. Bochum got city rights in 1321 and the oldest seal probably dates from the same time. The oldest existing seal dates from 1381 and already shows the book. All other seals of the city have shown a book, such as the seal shown below.

The colours from 1913 were historical colours, but are not heraldically correct, as it is not accepted to have a coloured object (here black) on a coloured field (here blue); at least one of these should be of a metal colour (silver, gold). Both the State Archives as the famous heraldic artist Otto Hupp tried to change the colours, but the city finally got the historical arms approved.

The arms were granted in 1913 with a mural crown, which was used until the Second World War.